Of the best and least loved: a review of Little Women

The trouble with writing a review about a novel you’ve been reading for over twenty years is how often and how quickly your thoughts and feelings about it can change – so much so that each time you get around to capturing said thoughts and feelings they seem to contradict the ones you had an hour before. Hence my initial reluctance to post any sort of “review” of one of the best and least loved books in my life (see what I mean about contradictions?). At some point however one must simply commit…

Things I love about Little Women

The heart of Louisa May Alcott, author

Little Women isn’t a strict autobiography of Louisa’s life, but she did put her real life into it. I think that’s at the heart of the power and appeal of this novel. Louisa’s real life sisters. Real life mother. Real life aspirations. Real life doubts, failures, and triumphs.

Jo and Beth’s deep regard and affection for each other is one of the things I love most about Little Women (as is the confidence between Jo and Meg as the eldest sisters). I also love the way all four sisters enjoy each other’s company and actually play together!

It’s fun, turbulent, sparkling, passionate, and utterly outside the social norms of their time. It’s not the poor girl working hard for her family mooning over the rich handsome boy next door who doesn’t notice her. (Avoiding spoilers, it’s just not that.)

I’m not a fan of all of Marmee’s advice and speeches, but I love the fact that she took the time to teach her daughters, that she worked hard to be an example to them, to actually be the sort of person and live the sort of life she would have them live.

The novel is unashamedly not just about how to keep a family together, but the question that every society must answer: what makes families – and ultimately the people within those families – not only stay together but thrive and enjoy life together?

There’s writing wrapped up in writing

One of the things I love most about Little Women is the story of Louisa wrapped up in the story of Jo who is writing books within the book. Book-in-a-book thrills me in the way quantum theory does – I don’t quite get why, I just know I find it fascinating.

The whinging about money rings true…

Generally whinging in a book is not a selling point for me – but the way financial struggle and its consequences is portrayed is so real, so relevant, so personal, that I find this aspect to be one of the most compelling elements of Little Women.

Who wouldn’t want to be friends with the March sisters? They write and perform their own plays, write articles books and songs, knit gifts, look after sick neighbors…They take joy in each other and in helping others and bring others along in that joy.

…at the same time, discipline is valued

It’s a counter-cultural novel in any age where luxury and leisure are associated with high status and sought after. It doesn’t disapprove of leisure as bad – but it does provide a helpful balance by showing how discipline and perseverance are also worth possessing.

Giving things away is just the done thing

The novel is replete with characters giving things away in the most beautiful of ways. They all give gifts, make sacrifices, dream up surprises – every single major character is involved in giving generously out of either affection or ethics at some point in the novel.

Nobody pretends to want to save the world

I still like a lot of children’s novels where the characters are clever and save the world. But I also like that Little Women is honest about the fact some children don’t have the most novel or noble of ambitions and want to be rich and famous like some adults do.

The tribute to Elizabeth, Louisa’s sister

While I have been angry and sad about this powerful plot point (not with Louisa, because it was a beautiful and brave gesture to have included this tribute to her real sister, just angry at tragedy), it is what tests everyone and forces character to the surface.

It’s not easy to put in a box

I think ultimately the thing I love about Little Women is that it’s a blend of fiction and reality, imagination and reflection, aspiration and insight. It’s not just a novel, a story, a figment of fantasy – it’s part history. It’s not just a biography, wish list, money spinner – it’s part alternate reality. It’s both what is and what could have been.

Things that bother me about Little Women

It was too realistic

I like idealism in my books. It’s not a surprise to find that sacrifice results in unexpected personal cost, misspoken words are a cause of regret, apparent loyalty is transferred to another, firmly held plans are abandoned – these are all things that happen in life. Still, having seen such things firsthand, they’re not things I read with excitement.

Beth’s story arc felt incomplete. Perhaps Louisa didn’t want to expose that much of what was so personal regarding her relationship with her sister Elizabeth, but the novel did feel poorer for the lack of details about Beth. I felt a sense of despondency clouded her, and found myself continually wondering about the woman she could have been.

One of the things that unsettled me most was how Laurie’s character seemed to be heading in a particular direction then took a dive for reasons that weren’t apparent. Why did Laurie become a dandy? For someone who seemed to have so much potential, Laurie’s stunted character growth in the second half of the novel was dissatisfying.

One of my favorite parts was when Jo chastised Amy about her approach to cousins of lords versus sons of grocers, and I expected this exchange to be a foreshadowing of things to come. Did Amy ever let go of her class-based snobbery? I was disappointed not to find any other plot development related to the subject.

There were undercurrents of bargaining with God, “being good,” and a lot of anxiety over whether one was “good enough,” with no resolutions within the story to the theological questions raised. One reached the end of the novel left with the uncertainty that Jo poignantly wrestled with – were her heroic daily efforts at self-control and literary excellence enough? The grace and gift of the gospel was missed, which saddened me.

Marmee might be the hero to Jo’s heroine. They share common struggles, similar personality and temperament, frequent exchanges of confidences – and she plays a “rescuing” role throughout the novel. But if Marmee’s the hero, where’s her backstory? How did she come to be the Marmee of today? What were her dreams when she was Jo’s age? How did she change from when she shared Jo’s life stage to present day?

Suppose we were to take Professor Bhaer as the hero – who I find to be one of the most under-developed yet potentially fascinating characters I’ve ever read (I think I would have liked him better had a deep back story been presented for him). What was he doing before he came to New York? How did he become a Professor? Compared to the development of Jo, Professor Bhaer doesn’t have much history or page time. 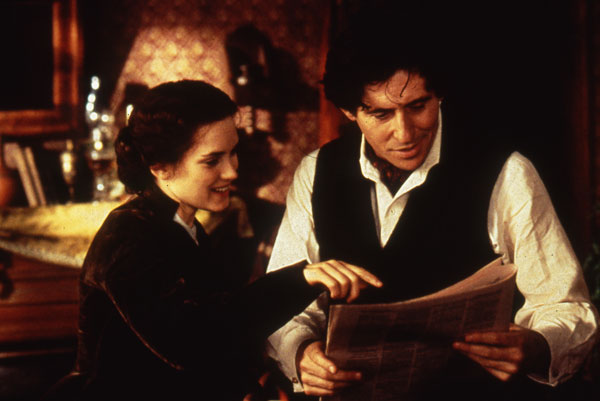 Laurie has the romantic background one might expect in a hero (or at least we are told so by Meg early on), but again, his story is not fleshed out in much detail. There were more questions than answers about his life. Were Laurie’s ancestors in any way involved in the East India Company and its demise? Was his mother’s family caught up in the turmoil surrounding the unification of the Italian states? Why is he in Concord?

(Do I just want to know way too much information about my book characters and nobody else cares…? Maybe…!)

Little Women is a book about the possible lives of women written by a woman who didn’t get a chance to live them. It speaks for the Beths whose voices are stifled, the Megs who diligently and quietly care for their families, the Amys who have talents beyond their looks and charms, and the Jos who dare feats beyond convention. It’s a book where un-lived possibilities become real – and for that it is beloved.