When in search for somewhere scenic to walk, talk, think, draw, picnic, row, and skate…it’s hard to go past the places the March sisters in Little Women might have been. This trail follows some of the picturesque reserves between Concord and Boston, Massachusetts. 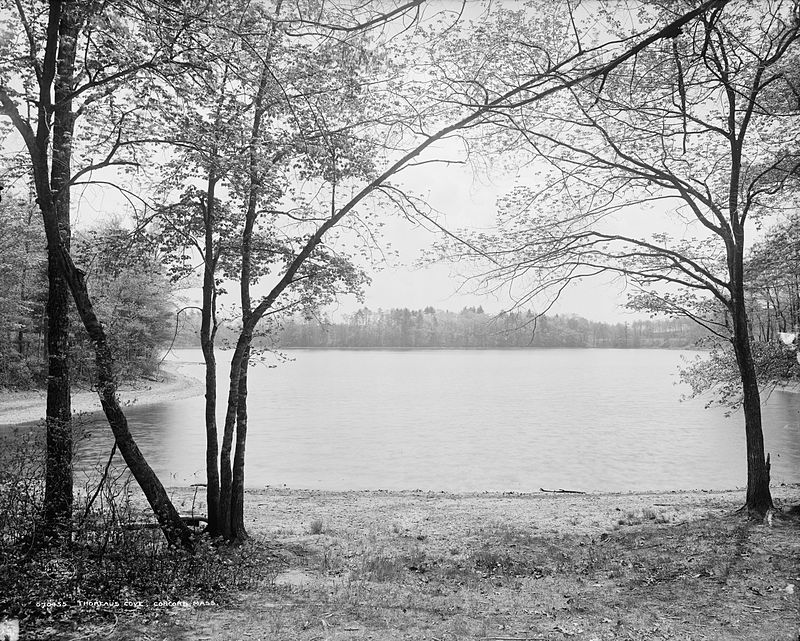 A lake in Concord, Massachusetts, Walden Pond was made famous by the writings of Louisa May Alcott’s teacher Henry David Thoreau. He described a portion of this natural beauty thus, “It was completely surrounded by thick and lofty pine and oak woods, and in some of its coves grapevines had run over the trees…it had the appearance of an amphitheater for some kind of sylvan spectacle.” (The Ponds, 1854.)

In winter it would freeze, its ice so thick that portions of the lake were harvested for export as far as India and the Caribbean. The Pond would have been a lovely setting for Jo’s frequent walks and perhaps her skates with Laurie.

America’s oldest botanical garden, this 24-acre reserve features a variety of plants as well as Victorian-style monuments and statues, including an equestrian statue of George Washington. In 1850, an Act of the Legislature and vote of the city dedicated the land for public use. The garden features a lake in its centre – home of the Swan Boats, first launched in the 1870s.

In winter the lake freezes and is open to skaters. Bring your best friend for a skate and imagine the races Jo and Laurie must have had.

The Sudbury, Assabet and Concord Rivers

Walking trails wind through the woods and open meadows alongside these slow flowing rivers. Perfect for hiking and boating – and in winter, ice skating. Some sections are more reliable than others (the ice under bridges notoriously not).

The variable nature of these frozen rivers might have served as inspiration for the scene in which Amy fell through the ice as she attempted to follow Jo and Laurie. Skating on rivers is not for the faint-hearted – take great care and check the ice twice, even if in the company of fellow prolific skaters!

For over a hundred years, Fairhaven was a popular spot for “a Sunday walk or autumnal holiday trip, as no better view can be had of the waving tree-tops and gentle river.” (George Bradford Bartlett, 1895)

One can imagine the scenes of Camp Laurence here: the picnic set up under a tent with Jo making coffee, Jo and Laurie eating out of one plate, shy Beth befriending the injured Frank, Fred cheating Jo at croquet, John teaching Meg German, the hilarious games of Truth and Authors, and the rowboats tethered by the shore ready for a leisurely float down the river.

Described by the US Executive Office of Energy and Environmental Affairs as “a welcome retreat for city dwellers and a suitable terrain for hikers, mountain bikers, horseback riders, rock climbers, cross-country skiers and picnickers as well as natural and cultural history buffs,” Middlesex Fells features a place called Lawrence Woods, as well as The Sheepfold, Bellevue Pond, and Wright’s Tower.

The Sheepfold is an open field frequented by picnickers; Bellevue Pond is surrounded by trails leading up to Wright’s Tower which looks out over the Boston Basin; Lawrence Woods boasts views and ephemeral pools.

Take along a copy of Little Women and read about the Marches and Laurie discussing their castles in the air as you make your way through the Fells.